At the network layer EARN was based on a “store-and-forward” technology. In a “store-and-forward” network information is sent to an intermediate node where it is kept and sent as soon as possible to the next node on the path to its final destination. The intermediate node verifies the integrity of the message before forwarding it. Each time the intermediate node confirms the receipt of the data the originating node deletes it.
The EARN “store-and-forward” system was originally based on IBM’s technology and used the Remote Spooling Communications Subsystem (RSCS) and NJE/NJI protocols on the IBM Virtual Machine (VM) mainframe operating systems, and JES2 (and later JES3, Job Entry Subsystem) on IBM MVS mainframe operating systems. 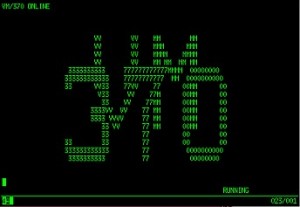 If at the beginning only IBM mainframe computers (providing services typically to thousands of students, teachers, and researchers at each node via IBM 3270 terminals) were connected to the network, the availability of emulation software fairly soon allowed the network to become quite heterogeneous in terms of machine type and operating system. Between 1984 and 1988 the network had increase tenfold and by August 1988 43% of the nodes on EARN/BITNET run VMSTM; 31% run VM; 11% run UNIX or a UNIX derivative; 5% run MVS; 3% run NOS; 1% run MUSIC; and the remaining 6% of the nodes run 23 other operating systems, each making up less than 1% of the total. Implementations of NJE/NJI included the native RSCS under VM, JES2 and JES3 under MVS, but also Jnet and ANJE under VMSTM, NJEF under NOS, UREP under UNIX(R) and AMBER under Primos.

At a later stage, at the beginning of the 90’s, a technology developed at Princeton University called VMNet became available, allowing to operate NJE network links over circuits using TCP/IP as the underlying protocol. VMNet therefore literally opened the door for EARN to share the same physical circuits used by the other organizations connecting to the Internet.

By 1991 the Network had increases of another 30% but the distribution by OS had not changed much: Here below is a map of all the nodes connected worldwide via the NJE protocol in 1991. The number of nodes connected increased gradually until 1991 before flattening out in 1992 (-3%) and start shrinking significantly starting from 1993.

In April 1993 the network was comprised of 3286 nodes (-5% compared to 1992) connected via 3773 links (a mixture of physical and virtual links over TCP/IP). The maximum number of hops (the distance between the 2 farthest nodes) was 15, with an average of 6.68 hops for the entire network. The Traffic volume compared to the number of NJE nodes between July 1991 and August 1994.
(one record could contain up to 80 bytes)

The NJE networks continued to operate far beyond the closing of the EARN association in 1994 (see next chapter) and the updating of the BITEARN NODES file, the file containing the list of all the existing computers (nodes) connected to the worldwide network, as well as information about the contact person at each node was maintained by the GUM-NCC (Global Update and Monitoring Network Coordination Center) an entity created ad-hoc at the University of Nijmegen (NL), managed by Ulrich Giese, former of the EARN Staff, as EARN Master Network Coordinator. The last version of BITEARN NODES I was able to find is dated July 2001 and contains 179 Nodes.